Around the middle of May this year (2017) I was browsing through my Netflix recommendations when I came across a documentary called That Sugar Film. I decided to watch it. It is not an exaggeration to say that film changed me; at least since then and for the foreseeable future. After watching that film I spent the remainder of the month finishing off every food item in my house that contained added sugar. On 01 June 2017 I stopped consuming anything that contained added sugar for two months. At the start of those two months my weight fluctuated between 205 and 210 pounds. At the end of those two months I weighed about 180 pounds. The only thing I changed was to stop consuming added sugar. My diet was still terrible (and arguably still is), and I wasn’t able to ride my bicycle nearly as often as I would have like because of rain.

This is what my weight measurements look like for the past year: 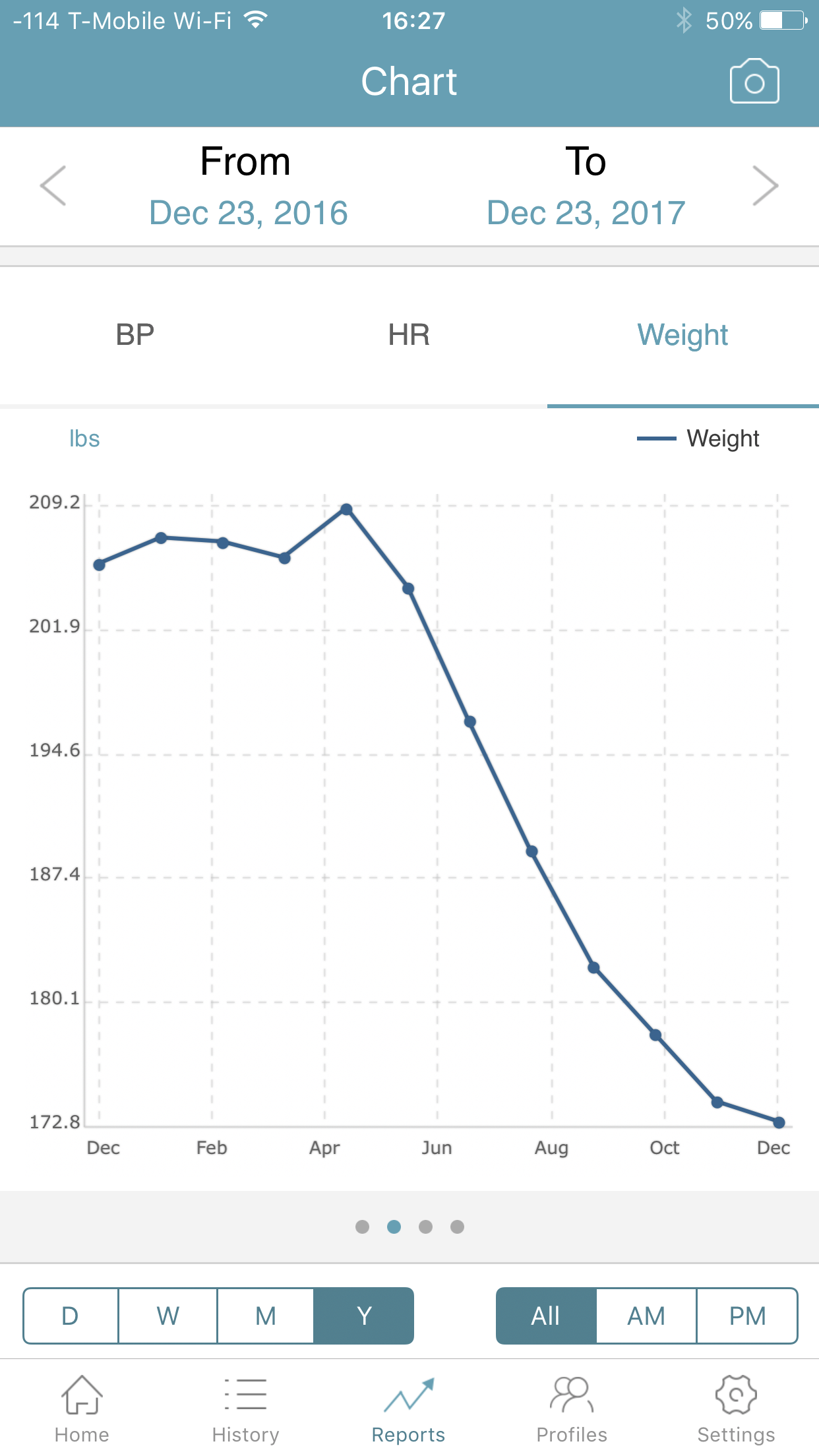 On 26 May 2014 I bought a new bicycle. I have ridden that bicycle almost every warm day since. My typical summer ride is almost 20 miles. I do not coast. I peddle the whole time. The elevation change over my typical ride is around 1,200 feet, and I average 13 miles per hour. That translates to a lot of hills and a very respectable speed for the type of bicycle. I am getting a significant amount of exercise over this ride. Given that information, examine this chart of my weight between 2016-03-01 and 2016-09-30: 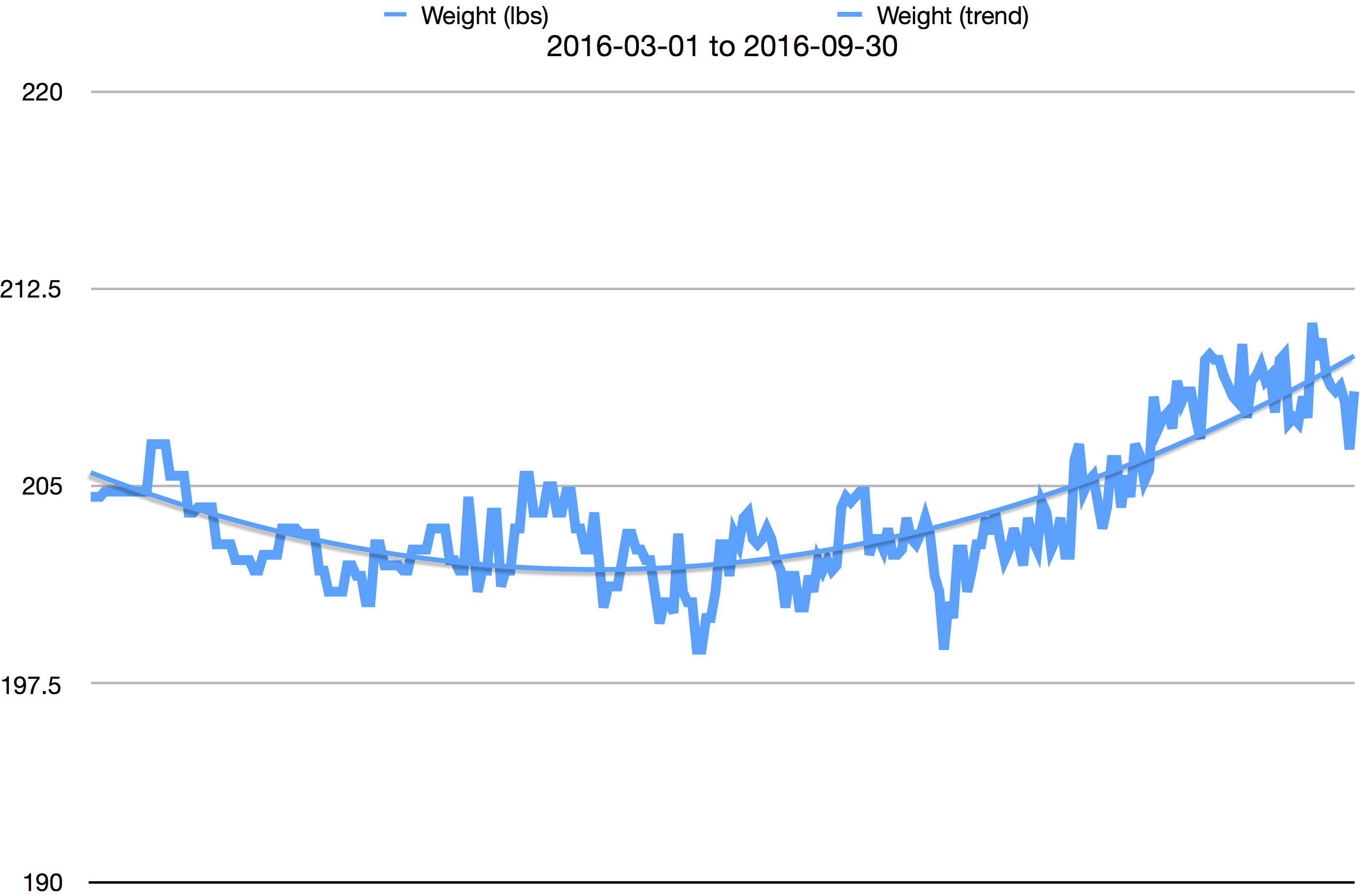 Bearing in mind that I had a couple of gout flare ups that sidelined me for a few weeks, and that I do not ride in the rain (unless I’m caught out), the thing to notice about that chart is this: my weight remained fairly steady at around 205 pounds, creeping up toward my maximum at the end of the season (due to less activity). This shows that no matter the amount of exercise I was getting, my weight remained roughly constant. The general belief is that, ceteris paribus, more exercise equates to less body weight (ultimately). This is clearly not necessarily true.

Now consider the following graph over the same time period only one year later: 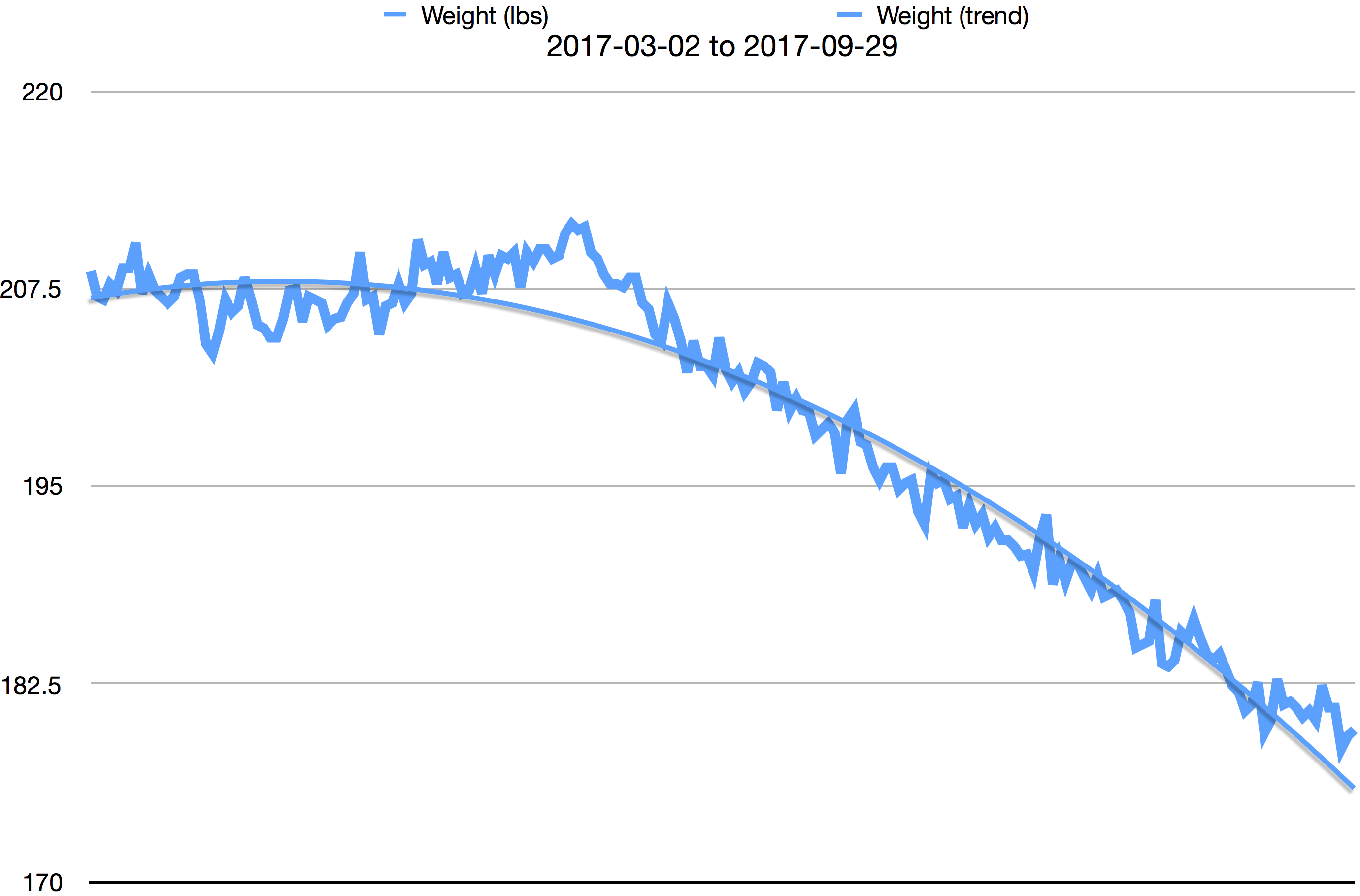 Again, rain and injury are factors, but the only actual change is the elimination of added sugar from my diet. As someone living in the South, I continued to eat ridiculous amounts of fried foods, breads, and very few “healthy” foods. Actually, that’s not quite true. In late August and all of September I was unable to ride my bicycle due to campaigning for public office (I lost). So I wasn’t getting anywhere near the same amount of exercise as the previous summer.

What I Have Learned

First, there are multiple forms of “sugar” that can be added to foods. The big ones are: refined cane sugar, honey, and corn syrup. Both cane sugar (“table sugar”) and honey are 50% glucose and 50% fructose (with honey this is a rough figure). With corn syrup it’s most likely going to be “high fructose” corn syrup; but it’s also very likely you’ll find both regular corn syrup and high fructose corn syrup in an item.

Second, fructose is metabolized by the body much differently from glucose. Wikipedia has some information on the subject, but here’s what my aunt (an epidemiologist) has to say about it:

In a diet of naturally occurring fruits & vegetables, there will still be a substantial amount of fructose. Both glucose & fructose are absorbed directly into the bloodstream from the gut, but fructose must be metabolized by the liver to be used as energy. The metabolites of fructose can then be used to produce either glycogen (the storage form of glucose) or fatty acids/triglycerides (fat storage).

Both glucose & fatty acids are used as energy sources, but glucose easily crosses the blood-brain barrier & is the most important source of energy for all cells. Fructose metabolism down the pathway to glycogen probably dominates when calorie intake is consistently in line with one’s requirements, since it will be used to maintain glycogen stores in the liver. However, in the typical Western diet with excesses of calories & fructose, the pathway towards triglycerides will predominate. (That’s why people with high levels of triglycerides are advised to cut sugar intake.)

That was in response to my asking her opinion on this video:

By removing added sugar from my diet I have been able to bring my sugar intake down to a “natural” level. It has forced me to prepare more of my own meals, and, in turn, learn how to make them. By doing this day-in and day-out, I am able to have a candy bar every once in a while, or a decadent desert when out for dinner with friends. And the sugar is oh so much sweeter when I do have it.

If you want to try this for yourself, and don’t want to figure it all out on your own like I did (I’m not following a specific diet), there are plenty of resources on the Internet. For example, there’s iquitsugar.com – a site with many good articles and a diet plan you can buy into. But it’s really not difficult. If you follow these guidelines, you’ll never turn back: